Hands of Peace a Passion Project for Carlsbad Couple 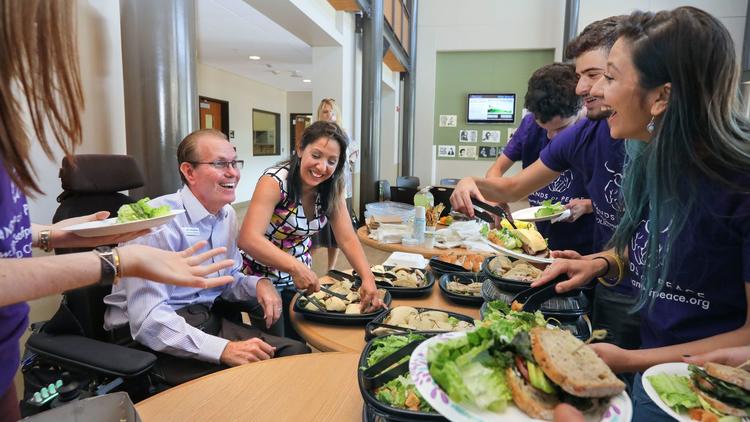 When organizers of the peace-building program Hands of Peace came and spoke at Glen and Rocio Middleton’s church four years ago, it took the Carlsbad couple all of two minutes to hop on board with their support.

Hands of Peace is a three-week program in Carlsbad that brings together 46 high-school-age Americans, Israelis and Palestinians from the West Bank for a private itinerary of dialogue, conflict resolution and leadership training.

Glen Middleton serves on the program’s leadership council and Rocio heads up the food committee, which is charged with feeding all the participants and faculty each day with attention to kosher, halal and vegan diets. The Middletons also donate 10 percent of their annual salaries to Hands of Peace and each summer they host participants from the Middle East in their home.

Sarah Heirendt, San Diego site director for Hands of Peace, said the Middletons have been incredible stewards of the program for most of its five years in Carlsbad.

“They have seen firsthand how the participants benefit and learn to be future leaders of change,” Heirendt said. “We depend on people like the Middletons to support youth peace-builders in our community. And they take it to the next level.” 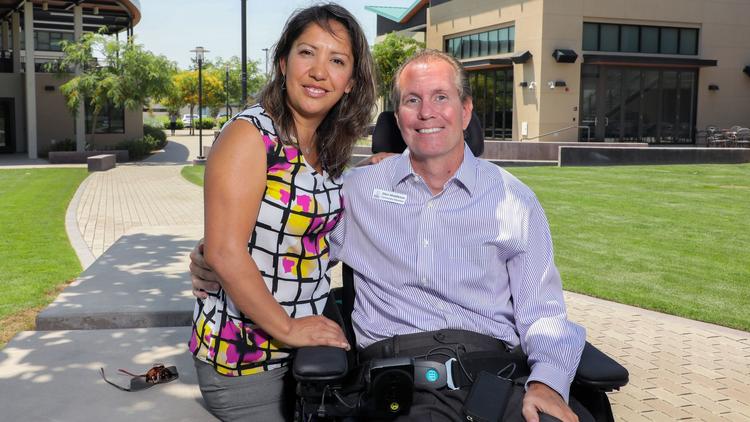 Above: Portrait of Rocio and Glen Middleton in Carlsbad, where they support the Hands of Peace program that takes place there for three weeks in the summer. (Charlie Neuman / San Diego Union-Tribune)

Rocio, 37, said the reason she and her husband are so deeply committed to the program is their 9-year-old son, Scott. They want him to grow up in a peaceful world and to see that sometimes problems can be solved with words.

“We’re not a political organization. We’re about communicating,” she said about Hands of Peace. “People get so lost in their everyday life, they forget the common dialogue of communication.”

Glen, 52, spent nine years in the Army as a helicopter pilot in the U.S. and South Korea before retiring at the rank of captain in 1997. He said his military background gives him a deeper appreciation of the Hands of Peace mission.

“When I joined the military, it was about protecting Western Europe from the Soviet Union. Then it was about protecting South Korea from North Korea,” he said. “This organization isn’t about being on one side or the other. It’s not about conflict. It’s about bringing people together in dialogue. It’s made me a different person. I see that through dialogue you can make a difference.”

Glen and Rocio met in 2002 in San Antonio, where he was working for the Paralyzed Veterans of America and she was a volunteer.

Glen, a New Jersey native, had stayed on in Texas, his final duty station, after a diagnosis of multiple sclerosis forced him to medically retire from the Army. Rocio emigrated to the U.S. from Guadalajara, Mexico, at age of 18 to go to college and was living in San Antonio caring for her uncle, a disabled American veteran. The Middletons married 14 years ago and moved to San Diego in 2007 before settling with their son in Carlsbad six years ago.

They now work as a team selling homes for Burke Real Estate Consultants. Rocio jokes that her husband has a second unpaid job, enthusiastically promoting Hands of Peace wherever he goes, be it walking the dog, grocery shopping and even whale-watching.

Hands of Peace was launched 15 years ago in Chicago as a creative way to help end decades of Middle East conflict by bringing together young Israelis, Palestinians and Americans who will be the leaders of tomorrow.

“The main goal is to bring participants into a different environment, a safe zone, where they can learn about one another and realize they’re not that different,” said Mindi Frankel, marketing consultant for Hands of Peace.

Frankel said the participants chosen for the program are selected from a pool of applicants on the basis of their interest in global affairs, leadership abilities and open-mindedness. Of the program’s more than 500 alumni, Frankel said a “significant majority” are now involved in the peace movement.

Among the past participants are several Peace Corps workers from America, an Israeli woman who’s now a BBC reporter in Jerusalem and a Palestinian man who is working at the British embassy in Tel Aviv, Frankel said.

This summer’s Hands of Peace program began July 11 with an ice-breaker exercise on a ropes course in the UTC area. On July 23, the group will feed the homeless in Carlsbad; on July 24, they’ll attend a cross-border peace summit on the U.S.-Mexico border, and on July 27, they’ll paint a peace-themed mural in Oceanside. The program concludes with a farewell reception from 5 to 7:30 p.m. July 29 at Temple Solel in Cardiff that the public is invited to attend.

The centerpiece of the program is group dialogue, where the participants meet for 2½ hours every day to talk about their lives and discuss issues of conflict. These sessions are closed to all but the youths and facilitators because they can become emotional and heated.

“It’s courageous for them to do it,” Frankel said. “There are tears, there is laughter, and there is shouting sometimes, but there is always resolution.”

Hands of Peace has a $1.1 million budget, the bulk of it raised via individual donations from people like the Middletons. This covers the cost of the three-week event, a year-round program of monthly community education events and hosted “dual narrative” tours to Israel and the West Bank for program alumni and volunteers from the U.S.

Heirendt said it takes an army of volunteers nearly 200 strong to produce the Carlsbad program. A big portion are the host families, like the Middletons, who house the participants.

Rocio said the three Israeli and Palestinian teens that they’ve hosted over the past few summers have become like family.

“We tell people we have four children, Scott and his three older siblings,” she said. “It’s been a great experience. The way it has changed our family is incredible.”