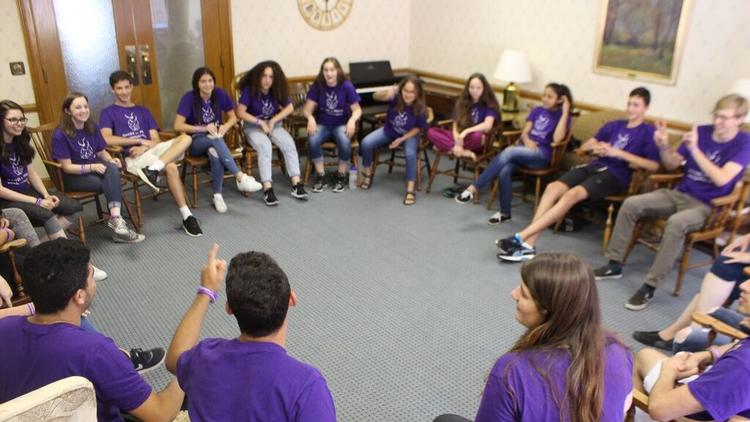 Above: Participants in the Hands of Peace Summer Program participate in a dialogue session, forging a connection and finding common ground. (Posted by Jenny Kustra-Quinn, Community Contributor)

Hands of Peace kicked off its 16th Chicago Summer Program on July 11, with 45 Israeli, Palestinian and American teens coming together for three weeks of peacebuilding. The participants, high school students of widely varied backgrounds, are working to break down the walls of conflict in the Middle East and throughout the world, by finding their voices as leaders, overcoming stereotypes and learning skills that are necessary for working toward peace.

Many of the Middle Eastern participants, who live with local host families, come from areas that are deeply divided by conflict, culture, geography and history, and they have experienced violence and loss as a result of the ongoing Israeli-Palestinian conflict. Yet they commit to forging a connection and finding common ground, through daily dialogue sessions led by professional facilitators, in which the teens share personal stories, listen and offer their views about paths for peace. The participants also take part in educational activities, a community-organizing workshop and team-building outings throughout Chicago and the suburbs. In addition to the 45 students in the Chicago program this year, there are 46 teens in the San Diego program, which is now in its fifth year.

Following the Summer Program, Hands of Peace alumni continue to grow as peace leaders, taking part in seminars, alumni club activities and a year-long leadership program to implement community projects in their
hometowns. In addition, Hands of Peace holds educational events such as film dialogue nights, guest lectures and community service projects. The organization also sponsors a Multi-Narrative Tour of Israel and Palestine for supporters.

Founded in the Chicago suburbs, Hands of Peace was started by members of the Christian, Jewish and Muslim communities, including Gretchen Grad, who was inspired to start the organization shortly after 9/11. The driving conviction behind Hands of Peace is that peace can be nurtured, one person at a time. Grad’s vision has resulted in more than 500 Hands of Peace alumni living and working for peace across the United States and throughout Israel and the Palestinian West Bank.