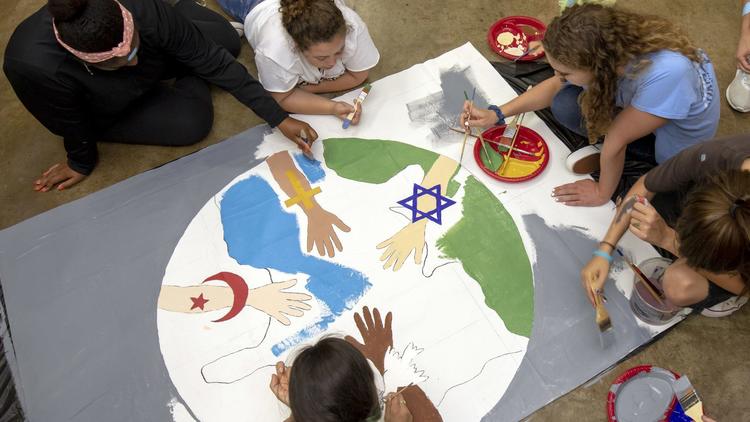 When Katreena arrived in Carlsbad three weeks ago to begin the Hands of Peace program, she felt as if she had a bullet lodged in her chest.

The “bullet” represented the pain and fury the 16-year-old Palestinian teen had carried with her for four years since her best friend was shot in the chest and killed during a protest against Israeli policies near their home in the West Bank.

But on Sunday night at the peace-building program’s farewell celebration at Temple Solel in Cardiff, Katreena told the capacity crowd that the hole in her heart is now filled with hope.

Now in its fifth year, the Hands of Peace program brings together 46 Israeli, Palestinian and American teens for a summer leadership conference that centers on daily conversations and team-building exercises to break down the walls of hate, prejudice and misunderstanding.

The long-term goal is for graduates to turn their experiences into action to end the violent, decades-long Middle East conflict through peaceful means. 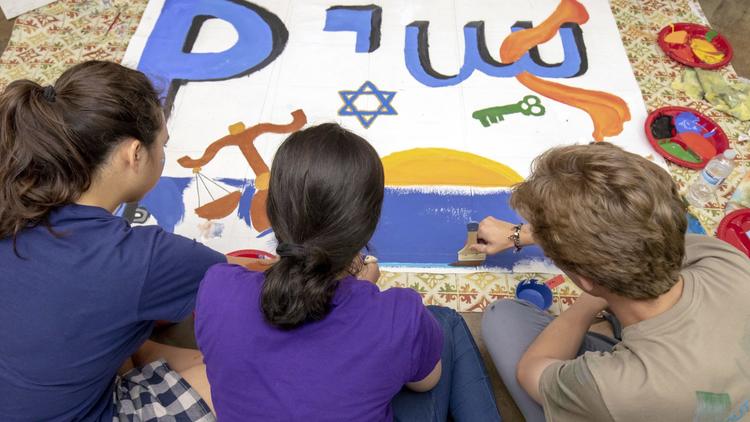 Above: American teenagers Mika Ellison, left, and Matthew Wirtz, right, team up with a Palestinian teen named Noor to work on a peace-themed mural at New Village Arts Theater in Carlsbad on Friday as part of the three-week Hands of Peace program, which concluded Sunday. (Don Boomer / San Diego Union-Tribune)

The stakes for these teens are high. It could be dangerous back home for some of the Middle Eastern teens if word got back that they were engaged in peace-making activities with the “enemy.” To protect their privacy at Hands of Peace, most used only first names and could not be photographed. Most group activities and all of their often-heated group dialogues were off-limits to everyone but the teens and a few adult facilitators.

Sunday’s celebration was the first time the participants had an opportunity to share their experiences with an audience, which was made up of several hundred donors, host families, volunteers, parents, alumni and community members.

The ceremony included some humorous short films about conflict resolution made by and starring the participants. A couple films showed teens of different faiths arguing over music until they realized they all liked hummus as well as pop star Justin Bieber.

A more serious film had individual teens describing their attitudes on the day they arrived. A Palestinian said he believed all Israelis were terrorists and an Israeli teen said the same thing about Palestinians. Others admitted coming in with reservations, bias and confusion. The film concluded with the teens reciting in unison that they were all victims of war, violence and poor decisions but now saw themselves as the key to a better life for all.

Near the end of the program, all of the participants gathered on stage to sing songs of peace. As they sang and swayed together, each teen held up a piece of paper on which they wrote the one word that described their experience in Hands of Peace. The words, some written in Hebrew and Arabic, included: New, change, love, proud, friends, growth, empathy, acceptance, powerful and peace.

Sunday’s keynote speaker was Gretchen Grad, who founded Hands of Peace 15 years ago in Chicago. San Diego is the only other city where Hands of Peace takes place but she hopes to expand the program to other U.S. cities.

Since 2003, 600 American, Israeli and Palestinian teens have gone through the program, which includes five additional levels of leadership training for those who want to continue. Many alumni now work in the peace movement.

Grad said the backbone of the program is the 2.5 hours each day that the teens spend talking with, and sometimes shouting at, one another. She said the participants learn to listen to other ideas and ultimately realize that behind their religions, ethnicities, nationalities and political beliefs they’re all alike and want the same thing: peace and prosperity for their families.

“They come steeped in their own narrative and go from black-and-white thinking to a more uncomfortable gray area,” Grad said, and that’s where the change-making begins.

Yasmin, a 16-year-old Israeli from a war-torn area near the Gaza Strip, told the crowd she came to Hands of Peace feeling lost. Because her father is Jewish and her mother is Muslim she felt trapped both personally and geographically in the middle of the conflict. Now she feels grounded in her dual identity.

“I came to hear the other side and see how they live and to find acceptance. This is a place where I can be Jewish and Muslim together. I can be Jerusalem,” she said.

Sydni Frankel, a Jewish 16-year-old from Encinitas, followed her older brother into Hands of Peace. Her mother works for the program and over the years they’ve hosted several participants from the Middle East in their home. The Frankel family also spent nearly a month in Israel touring and studying both sides of the conflict.

She said Americans like herself think they understand what’s happening there, but seeing it with her own eyes and hearing the heartbreaking stories from Hands of Peace participants was eye-opening.

Through the program, Frankel, a junior at San Dieguito Academy, said she has learned to listen, speak her mind, be open to new ideas and never judge others by their appearance or opinions.

“We are all human,” she said. “We are more similar than we are different.”

Second-year participant Marwan, a 17-year-old Christian Palestinian from the West Bank, said he had a life-altering experience this month that crystallized his passion for peace-making. One of his cousins died last week in an accidental drowning in Egypt and he understood for the first time the shock and intense grief that families suffer every week when family members die in the conflict zone.

“Every day that passes someone will get killed and his family will have the same terrible feeling that I do,” he said. “We should put an end to the bloodshed because with peace comes freedom.”